Travels with the Euro | Chapter 5, The Algarve 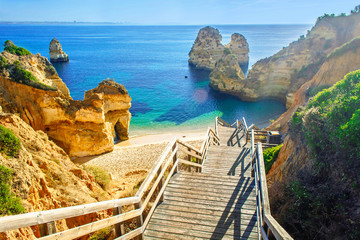 One of the questions I’m most often asked about the euro is whether it will go up or down in value against another currency – normally sterling or the US dollar. That’s an important question for anyone making international asset allocation decisions. Or, for someone like my my late father-in-law who had retired to the Algarve in Portugal, but still had sterling and euro-denominated income and assets. Each time we visited him in the Algarve, whether the euro was going to strengthen or weaken against sterling was one of his top questions.

There are several ways of answering it. The first is “I haven’t a clue. Exchange rate movements are impossible to predict accurately in the short-term; and not much easier to predict long-term”. Generally, that does not satisfy many people even though there is a large element of truth in it.

The paradox is that, in theoretical and applied economics, more has been written on exchange rate determination than perhaps any other subject. My former boss at Merrill Lynch, Michael Rosenberg, wrote the classic practitioner’s reference book on the subject (Currency Forecasting Irwin 1996. It’s out of print now but one is for sale on Amazon at £658.70. I’m keeping mine safe.)

That work raises many potential ways of ascertaining the likely direction of a currency. The approach I have used for some time establishes a range of reasonable values for any exchange rate. If it is outside that range, then it is fundamentally weak or strong. So, for example, the estimated range for the US$/€ rate was US$1.16-US$1.33/€ in February 2021. The actual rate was US$1.22/€, so it was within a ‘sensible’ range, neither excessively strong nor unduly weak.

That has not always been the case. When the euro was first launched, consensus expectations in the financial markets (always be careful about such expectations!) were that it would strengthen against the US dollar: it did the opposite, plummeting below parity, to a low point where one euro bought just from 85 US cents. The euro then almost doubled in value, buying US$1.60 at its peak in 2008.

Since its launch in 1999, the euro has been inside the tramlines of the fair value range just over half the time; below the range a third of the time and above it 15% of the time.

That sensible, fair value  range is derived from two different estimates of the appropriate exchange rate. The first is from the ‘law of one price’ or Purchasing Power Parity, PPP. This is the building block of most assessments of exchange rate determination. The second is obtained by using an economic model which considers a range of different factors which drive exchange rates, notably trends in the balance of payments.

Approach 1: the law of one price and PPP

Looking at the trend in that Big Mac PPP rate over time, the black  line in Figure 5.1, shows a steady strengthening of the euro against the US dollar: from US$1.03/€ at the euro’s launch in 1999 to US$1.33/€ in 2021. That is an appreciation of the euro against the US$ of around 1% per year, reflecting the fact that eurozone Big Mac inflation has been 1% higher than US inflation.

Of course, using the price of a hamburger to determine where the euro should trade against the dollar can be readily criticised as lacking financial sophistication.

The range of goods considered in assessing purchasing power parity can be widened out – to include a basket of consumer goods, for example –  or it can be based on the prices of goods which are traded internationally.

There has been a great deal of research on the Big Mac approach to exchange rates. It has been the subject of several PhDs.

The basic concept of FEER is to estimate the exchange rate that will bring both internal and external balance to an economy. Internal balance means that the economy is operating at around its full capacity and the unemployment rate is low enough to ensure that everyone who wants to work can find a job.

External balance means that the country’s current account surplus or deficit is not excessive – no larger than 3% of GDP. The current account deficit reflects the country’s exports of goods and services (the trade balance) plus net income received on the country’s overseas assets and net transfer payments from overseas (such as remittances from or to foreign workers).

A 3% limit is chosen as one which is sustainable in the long-run and one which, for most countries, can be reasonably easily financed by capital inflows. The US, for example, can finance such a current account deficit because there is generally a healthy demand to hold US dollar-denominated assets: whether US Treasury bonds, equities, real estate or simply bank deposits. An alternative is for a country to run down its holdings of foreign exchange reserves. They can be used to support the value of a currency especially at times when capital inflows turn to capital outflows.

If foreign investor confidence is lost – the strangers are no longer so kind – the result can be a very sharp decline in the value of the currency.

In 2012/13 five countries the ‘Fragile Five’ ran into difficulties. All had large current account deficits – between 3% and 9% of GDP – and so were reliant on capital inflows. When previous capital inflows turned to outflows their currencies fall sharply: by between 30% and 70% against the US dollar (see Figure 5.3).

If a country has, or  is expected to have, a large current account deficit, then one option would be for it to restrict demand in the economy by, say, interest rate increases or higher taxes, so that demand for imports falls. But that would be likely to lead to higher unemployment pushing the country away from the ‘internal balance’.

As an alternative, allowing the exchange rate to weaken raises the prices of imported goods (reducing demand for them) and makes exports cheaper (increasing demand for them). Although the latter effects have often been smaller than predicted by many economic models, the important point is that the exchange rate ‘takes some of the strain’ in reducing an external imbalance rather than relying on higher interest rates or other measures to reduce demand.

Combining these requirements of internal and external balance allows an estimation of the FEER.

So, one initial conclusion from that analysis is that over time the euro has appropriately strengthened against the US dollar because it generally has had a lower rate of inflation; and it has, admittedly for only around half of the time since 1999, traded within the bands determined by PPP and equilibrium exchange rate consideration.

There have, of course, been big swings in the exchange rate from year to year. In October 2000, the euro hit a low point of US$0.83/€: the euro had weakened since its launch, in contrast to broad market expectations that it would strengthen. Fragile confidence in the euro coupled with a generally  strong US dollar and US equity market (this was the time of the ‘dot com’ boom) were the primary reasons.[i]

As well as interest rate differentials, relative economic growth rates, the relative stance of monetary and fiscal policies, the behaviour of asset prices, political concerns (notably the potential for a break-up of the euro) are some of the many other factors that can drive exchange rate movements.  Given such a wide range of factors, it is perhaps no great surprise that short-term movements in exchange rates are difficult to predict.

It is possible to define a sensible, fair value range for where the euro should trade against other currencies. Since the euro’s launch, when the exchange rate has moved outside that fair value range against the US dollar, a correction has generally taken place. Both overvalued and undervalued levels for the euro against the dollar have tended to be corrected. It’s better approach than saying “I haven’t a clue” when asked about the future movement of the exchange rate, but not an approach that can be used with great precision.